The world’s best bodyboarders took to the water on Day 2 of the 2015 Iquique Para Todos ISA World Bodyboard Championship, marking the first day of competition after a lay day on Tuesday. Day Two featured improved conditions with increasing pulses from an incoming swell, but a morning high tide and lulls between sets made for fierce, hard-fought heats as the athletes battled for position to find the waves with the highest scoring potential.

On Wednesday, heats in the Open Men, Junior Boys, Junior Girls and the ISA Aloha Cup Semifinals ran in the powerful waves of la Punta 1. The international contingent of competitors, reigning from 14 countries, showed the crowd that formed at Playa Cavancha the world-class talent that they possess.

The morning kicked off with the Junior U-18 Girls, who faced some of the toughest conditions due to the morning high tide. Japan’s Shiori Okazawa was able to find the best waves and connect multiple maneuvers before the waves washed over the exposed reef, notching the highest women’s heat total with 14.20 and highest women’s scoring wave of 7.27.

Following the Junior U-18 Girls, the men took to the water starting with Round 1 of the Junior Boys U-18 Main Event. The first men’s heat exemplified the level of competition present at this world championship, as Brazil’s Socrates Santana scored a heat total of 14.20 narrowly edging out France’s Milo Delage’s score of 13.27 for first in the heat. In the following heat the defending ISA Junior Bodyboard Champion, Iquique’s Yoshua Toledo, reminded the competition that he intends to repeat his title by finishing on top of his heat with a two wave total of 10.20 over Yazdanny Castro’s (CRI) 9.16 and Luis Zambrano’s (VEN) 4.40.

As the day progressed, the tide started to go out, which provided improved conditions for 11 heats of the Men’s Open Main Event. Team France made a statement as all three of their competitors, Pierre Louis Coste, Yuan Salaun and Amaury Lavernhe took first place in their respective heats. Lavernhe put an exclamation point on France’s strong performance, finding a long barrel and executing critical flips to earn the highest heat total of 17 and highest single wave total (8.83) of the day.

“I really like the vibes in this contest. I think it is really important for the sport,” stated Lavernhe. “I had a great heat and the swell is starting to build. It’s small out there but really powerful, a perfect wave for bodyboarding.”

Italy’s Davide Danti was one of the competitors who fell to victim to Team France’s dominance in the Men’s Open Division. As the sole representative of Italy, he spoke about the union and camaraderie among the teams at the competition.

“I came here alone to represent Italy in the competition so everyone knows that there is bodyboarding in Italy. I am surprised by the support from the other nations. Specifically the guys from Mexico, Costa Rica and the locals have been here behind me, holding my flag.”

Davide will have a second chance to advance in the Open Men’s Repechage Round on Thursday.

The afternoon proceeded with the first Repechage Round of the competition, as Portugal’s Carolina Esteves (8.63) and Peru’s Angela Lopez (7.5) were able to advance through the round and keep their hopes for a Gold Medal alive. Costa Rica’s Yuliana Campos’ score of 5.26 was not enough to overcome her opponents, resulting in her becoming the first athlete eliminated in the competition.

The first day of competition concluded with the ISA Aloha Cup, a tag-team style relay featuring two open men, one junior boy, one woman and one dropknee competitor from each of the of the top seven teams in the 2014 edition plus Japan, who did not compete last year. Chile and Japan advanced through the first Semifinal with respective team scores of 63.79 and 63.06, due to a costly jump-start penalty by Brazil that sent them from first to third place. In the second Semifinal, France and Portugal came out victorious over Venezuela and Costa Rica, set for a Finals showdown with Chile and Japan later in the week.

“The wait is over and competition is underway in Iquique. These athletes amazed with incredible, crowd-pleasing maneuvers and high scores. Stay tuned to see what is to come as the waves get bigger and the competition intensifies tomorrow!”

The second day of competition will get underway at 8am on Thursday morning at la Punta 1 in Iquique, Chile with the following heats: 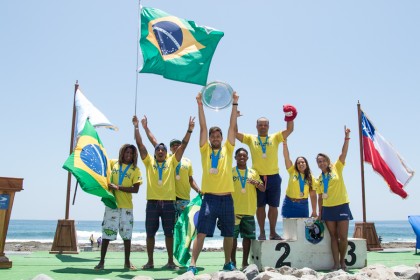