On the historic final day of the 2016 Stance ISA World Adaptive Surfing Championship presented by Vissla and the City of San Diego, Team Brazil emerged victorious and was crowned the first-ever Adaptive Surfing World Team Champion. The host Team USA earned the Silver Medal, with Chile and Australia respectively earning the Bronze and Copper Medals.

Three of the four Gold Medalists in the inaugural edition in 2015 defended their titles. Brazil’s Fellipe Lima (AS-3, Upright), Denmark’s Bruno Hansen (AS-4, Prone) and Australia’s Mark ‘Mono’ Stewart (AS-2, Stand/Kneel) repeated their feats from 2015 and earned their second Gold Medals. Spain’s Aitor Francesena (AS-VI, Visually Impaired), Brazil’s Davi Teixeira (AS-5, Assist) and South Africa’s Antony Smyth (AS-1, Stand/Kneel) were the first-time Gold Medalists on this ground-breaking day of Adaptive Surfing.

“This was an incredible finish to a monumental week of competition for the sport of Adaptive Surfing,” said ISA President Fernando Aguerre. “Throughout these four days we witnessed the sport grow and develop leaps and bounds. The six World Champions, the 77 athletes, the 22 countries and Team Brazil’s Gold Medal performance will forever be a part of the history of Adaptive Surfing.”

“This event has built upon the platform created in 2015 to launch the sport towards Paralympic inclusion. However, the Paralympics are not the final goal, they are the ultimate achievement. The final goal is to spread the joy of Adaptive Surfing around the globe, which is what we accomplished this week.”

“I would like to say thank you on behalf of the Stance employees across the USA and 50 countries,” said Stance President and Co-Founder John Wilson. “This event has epitomized Stance’s message of human originality. I hope you all go back to your countries with new friends, amazing experiences and having had enjoyed the competition.”

The Final Day of competition kicked off in clean 2-3+ foot surf at La Jolla Shores. The world’s best adaptive surfers competed for a spot in the Finals and a chance to win the Gold Medals.

“Anything is possible,” said Francesena. “We have to work with what we got, so this proves that with drive and passion you can do anything you set your mind to.”

Brazil’s Elias Figue Diel earned the Silver Medal in the visually impaired division, followed by Australia’s Matt Formston with the Bronze and France’s Gwendal Du Fretay with the Copper.

The AS-5 Assist Final followed, setting up a 2015 rematch between the defending Gold Medalist Jesse Billauer (USA) and runner-up Davi Teixeira (BRA). This time Teixeira got the better of Billauer, earning the Gold Medal and giving Team Brazil a strong boost to the top of the podium. Australia’s Barney Miller finished with the Silver, Billauer with the Bronze and Peru’s Pancho Arbulu with the Copper.

Eleven-year-old Davizinho expressed his emotion after winning the Gold Medal. “To be crowned world champion has been a dream of mine my whole life and that dream has finally come true. I knew that this day would arrive, and it finally happened!”

In the third final the AS-4 Prone Division got their chance to shine. The 2015 Gold Medalist, Bruno Hansen (DEN), who was paralyzed in a car-jacking in 1994, defended his title with a commanding 6-point lead. Christiaan Bailey (USA) and Alvaro Bayona (ESP) earned the Silver and Bronze Medals respectively for the second consecutive year, while Costa Rica’s Mathius Hoogth earned the Copper.

“It’s overwhelming, just fantastic,” said Hansen. “I want to share this Gold Medal with everyone that helped me get here, to all those that inspire me to surf.”

The AS-3 Upright final ensued with another strong performance for Team Brazil. Fellipe Lima, the 2015 Gold Medalist, topped off his stellar performance with the first perfect 10-point ride in the history of the event. USA’s Jeff Munson followed with the Silver, Great Britain’s Chris Jones with the Bronze and Chile’s Elias Valencia with the Copper.

“That was a great heat! It wasn’t easy with Jeff Munson out there. He was killing it,” said Lima. “I studied the conditions and decided that I needed to find the lefts to get my scores and it worked out for me. It means a so much for me to win back-to-back titles for my country of Brazil.”

The AS-1 and AS-2 finished off the day. The two divisions, which divide the standing and kneeling surfers according to the athletes’ level of function, provided an exciting closing to the competition.

Australia’s Mark ‘Mono’ Stewart continued his dominant run through the AS-2 Division, repeating with the Gold Medal.

“I am so stoked. I thought winning the Gold Medal last year was great, but this year is even better,” said Stewart. “Australia has a great group this year and it took a real team effort all week.”

France’s Eric Dargent won the Silver Medal, Brazil’s Henrique Saraiva the Bronze and Hawaii’s Colin Cook the Copper in the AS-2 Division.

In the final heat of the day, Antony Smyth, the 2015 Silver Medalist, took home the Gold Medal this year for Team South Africa. Mike Coots, the 2015 Copper Medalist, also stepped up this year and improved on his result with the Silver Medal. Another South African, JP Veaudry, took the Bronze Medal and Japan’s Kenjiro Ito the Copper.

“I was terrified that I wouldn’t get the waves and I would repeat as the runner-up as I did last year,” said Smyth. “I let out tears of relief when I came in. From the moment I left the beach last year, I knew that I would come back and try to win it. I’ve done it now.” 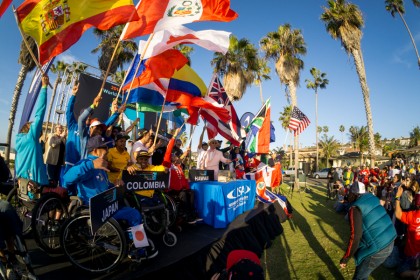