Team Iran eliminated from competition, but optimistic about future of Iranian surfing

The sixth day of competition at the 2019 ISA World Surfing Games presented by Vans featured world-class performances and surprising upsets in Miyazaki, Japan.

Brazil’s Italo Ferreria, USA’s Kolohe Andino, and Mexico’s Jhony Corzo excelled among the world’s best male surfers, all equaling the highest wave scores of the day with 8.5 points each in challenging conditions at Kisakihama Beach.

Andino’s Main Event Round 2 heat total of 16.37 held to be the highest of the day, while Ferreira showed progressive maneuvers to closely follow with the second highest total of 16.17.

Mexico’s Jhony Corzo, the 2017 ISA World Surfing Games Gold Medalist, rebounded well after falling to the Repechage Rounds and marked a 16-point heat total in his Repechage Round 1 heat.

USA’s Kelly Slater continued to show strong form in the early rounds and took first place in his Round 2 heat with a heat total of 13.5 to advance into Round 3.

While some of Surfing’s stars shined, others struggled in the smaller conditions.

Australia’s Julian Wilson and Owen Wright both lost heats in the Main Event and Repechage Rounds, resulting in early exits and a major blow for the Aussies in the team rankings.

Wilson was sent home by South Africa’s Jordy Smith and the defending Men’s World Surfing Games Champion, Argentina’s Santiago Muñiz, who bounced back strong after losing in Main Event Round 1 on Wednesday.

Bourez passed his subsequent Repechage heat and spoke about the universal representation of Surfing on display at the event.

“It’s amazing how many surfers have come here from all over the world,” said Bourez. “It’s good to see countries in which I never thought there would be surfers.

“As far as the Olympics, France has a strong team, so I hope that I can fight for that slot in Tokyo 2020 next year.”

Team Iran, who made their debut in the ISA World Surfing Games at the 2018 edition in Tahara, Japan, returned with two competitors in 2019.

Both of Iran’s surfers, Bijan Bahrololoumi and Farbod Motlaghfar, fell in the Repechage Rounds of the morning, eliminating their country from the competition. Despite the quick exit from the event, Bahrololoumi spoke about how he views this experience in a positive light.

“It’s been a phenomenal week,” said Bahrololoumi. “It’s been awesome learning from the top surfers in the world.

“My participation here is a steppingstone. I am setting the stage to pass the baton to the next generation. Iranians have something to aim for now that they know the way.”

“The beauty of the World Surfing Games is that you get everyone – the unknowns and the very well known. When you get all that together you are in for some really special, intense moments.

“Today we saw some of the world’s best not making it through and some of those non-traditional surfing nations winning heats and putting out great performances. It’s every surfing nation all together and that’s what makes this amazing.”

The tentative schedule for the remainder of the competition is as follows:

The 2019 ISA World Surfing Games presented by Vans is broadcast Sept 7-15 on www.isasurf.org.

Within the country of Japan, the broadcast is exclusively available on Abema TV.

Brazil and USA Locked in Battle for Team Gold 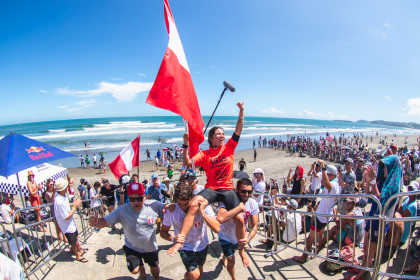 About the International Surfing Association: